skip to main | skip to sidebar

Images from our last two days in Belize 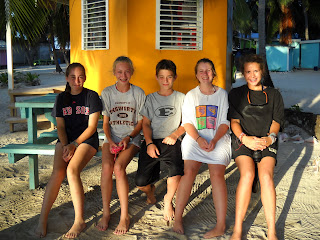 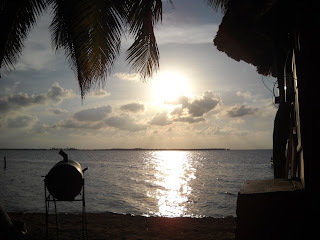 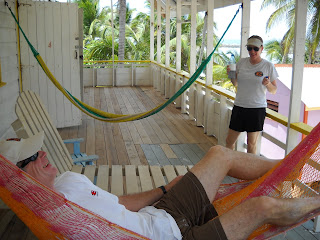 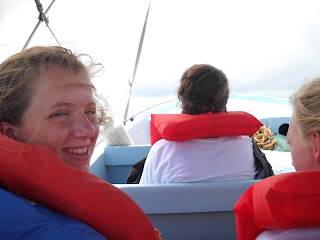 Posted by World Leadership School at 7:24 AM No comments:

We have arrived safely at Tobacco Caye. Bandwidth on the island is very limited, so no posts with pictures while here. We continue to take lots of pictures, and I hope to have them posted during our layover in Houston on Tuesday.

Just snorkeled on the reef right off the island and will head a little further south tomorrow for an all-day outing.

Goals Met (and a little extra, too).

One of our goals was to put in a monkey bar and paint it. 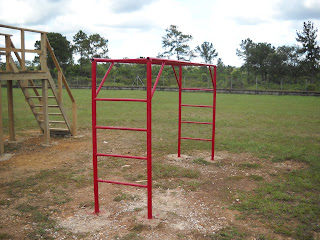 Another goal was to build a slide. 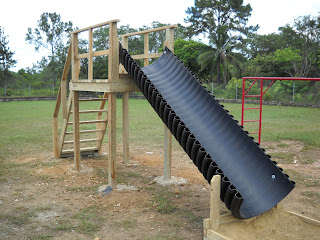 One goal was to repaint and add swings to the swing set. (There was only one swing to begin with.) 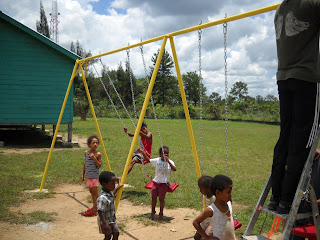 Our final goal was to build and put in soccer goals for the kids to play with. This was our final project which we completed today. 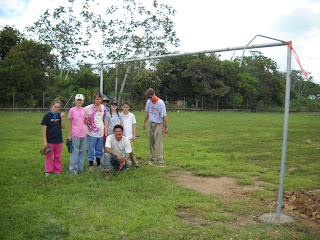 Posted by World Leadership School at 1:00 PM No comments:

Today we hung the new swings on the swing set (when we got here there was only one, now there are four.) We also put the soccer goals up. In order to do this, we had to dig holes and make concrete. It's not as easy as it sounds, expecially in the hot sun. First, we had to dig four holes. Sounds easy. It's not. We had to remove the old posts which had been anchored over two feet into the ground. Then we had to dig the holes. Digging thirty-one inch holes through hard dirt and the through clay is no small feat. But at last, we suceeded with the preliminary preparations. Next, we had to walk across the field and shovel sand in the wheelbarrow and then roll it back across the field four times. Then we had to get four 5 gallon buckets of water. (One bucket did not have a handle, and the wheelbarrow had rusted through, so it broke in the middle of our labors.) We helped mix the water in with the concrete and sand until it was nice and thick, shoveling sand and concrete togther. Luis showed us how to pour the concrete into the 31 inch holes we had dug. The night before Trinidad, who works at Monkey Bay, worked welding the metal soccer goal posts together. He had to weld hooks on pipes for the nets, and it took many, many hours to make the goal posts. Before the soccer posts in the village were wood and simply stuck in the ground, so the new ones will be stronger and last longer.

While we worked, many kids from the village came to visit and help. My favorite was Kyle, who has very long hair that he puts in a bun on the top of his head. He is 4 years old and has 2 older sisters. At first we thought he was a girl! He also likes to help a lot with carrying buckets and pushing the wheelbarrow. He likes to be held and swung around in the air. I will miss him. 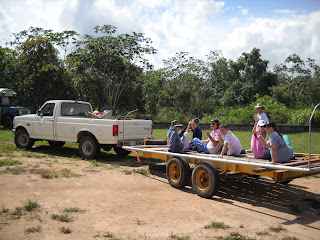 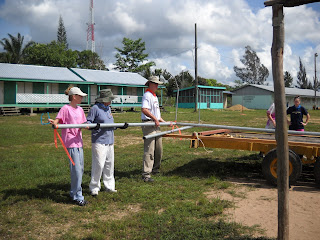 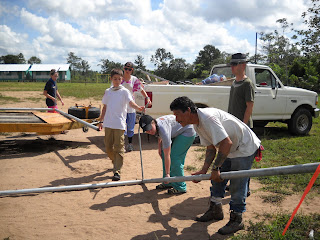 Posted by World Leadership School at 9:00 AM No comments: 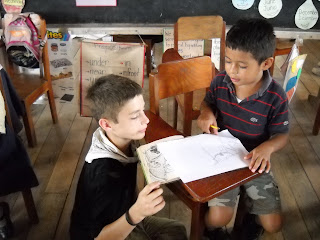 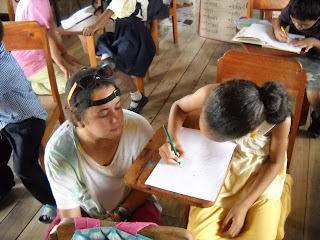 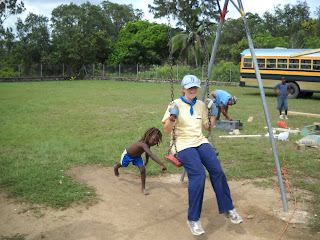 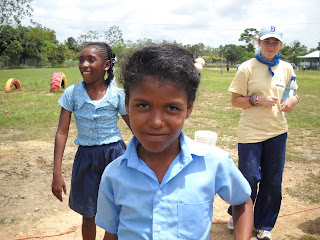 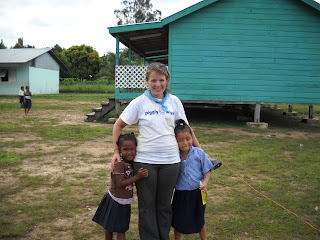 Posted by World Leadership School at 3:00 PM No comments: 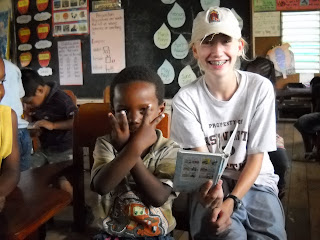 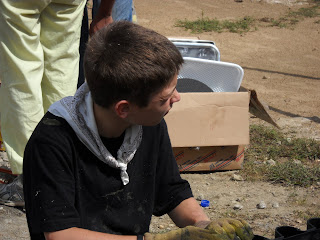 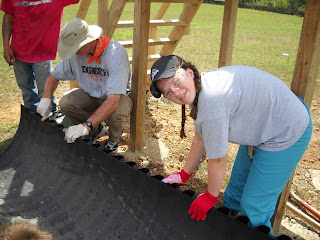 Today, we had our last two hours with the British students here at Monkey Bay. After breakfast, we went to La Democracia and started to work. We drove up to the school, and see a slide getting worked on. We split up into groups, some working on sanding the sharp sides off the slides and adding a second coat of paint to the monkey bars and swing set. During the time of sanding and painting, George and I interviewed Mr. Garcia, the school principal. After, we all helped the kids with the computers again. After we helped them with the computers, we played with the kids, and helped pick up trash, and take pictures. We then left to go back to Monkey Bay to eat lunch.
-Jane Anne Darken

Once lunch was over we went back to the village to finish the swings and slide. Those jobs were mostly for Chester and Luis so all of us played with the kids after their exams. Radiance and Irma sister of Radiance) also showed up and brought music for us to dance. Most of the afternoon was mellow and we basically played with the children and learned more about them. One game we played was standing in a circle with the children holding hands while music played. One person would walk around the cirle and where they stopped, they would dance with that person. It was so cute to see the little girls shaking their booties. We also got to see the kids enjoying the slide we built for them. They kept sliding and sliding and sliding. The line was so long to get on the slide, and they were so excited and happy. One girl, about the age of 13, slid down, and we could tell she'd never been down a slide before! Around 4:30 we went back to Monkey Bay and Mr. Corzine, George, Anna, and Chris all went to the river and swam, while all of the girls took showers and organized. Finally we had dinner and blogged.
-Sarah Crowe
Posted by World Leadership School at 1:00 PM No comments:

1. When do you start our school term and when does it end?

We start our term in September and go to November. We break in December for the holidays, and we start again in January and go through July. Our summer break is from July to September. (The kids at La Democracia were in the process of preparing and taking exams. The pre-firsters and eighth graders were having graduation practice when we first arrived.)

2. What are the start and end times of a regular school day?

3. What are you looking forward to the most when the playground is finished?

4. What is your favorite sport?

Posted by World Leadership School at 11:00 AM No comments: